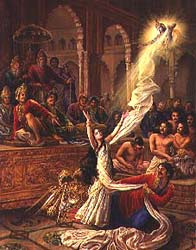 This is my entry for Women's Web -My Favourite Female character.
My favourite female character is Draupadi from Chitra Banerjee Divakaruni's Pallace of Illusion.

All I know of great epics, from my small age of Draupadi, was sweet, fair lady and that role played by Roopa Ganguly in doordharsan's Mahabharat and gaping at the sweet baby face of Arun Govil in Ramayanam. All our school note books in 80s had ramayanam labels on it.
Chitra Banerjee has given Draupadi a powerful voice, its as if Panchalli is telling us her story. The original Panchalli is dark and attractive, fiery, wild tempered, haughty princess not the stereotypical docile, "fair" beauty that we get to see on TVs.
But this character has come a long way from her lonely childhood, with her beloved brother Dhri as her only companion and shares a special bond with Krishna, her childhood friend to her tricky marriage to Pandavas. Strangely, both of them are misled by the belief that they are born to fullfill their destiny- Panchali to bring about a war and Dhri to kill Drona.
This fiery princess surprisingly meekly accepts Kunti's decision(fooled by Vyasa's prediction of her life) of her being married to all Five Pandava Princes. This is where destiny changes her life...
Oh how she loves Karna. If only she had not insulted him at her swayamwar(which she does because of a strange folly and fate), her life would have gone in a different direction.
Those sad, ancient, unsettling eyes, his battered knuckles that she wished to touch and own. That forbidden love that she secrets for Karna even after her marriage. She goes to Duryodhana's palace just to catch a glimpse of Karna, without knowing the danger that awaited her and be shamed there. She cries over his death, finally the reader of the book, is at peace, by knowing that they get united in heaven.
Karna from his end, equally loves her. When the Panchalli and husbands live in exile for 12 years, he sleeps on the floor, refusing any comforts because Panchalli suffers in the forest. They continue to love each other, unknown to each other.
Her feelings at the time of his death- “It grew into a great radiance around me. A feeling emanated from it that I have no words for. It wasn’t sorrow or rage. Perhaps, freed of its mortal bondage, Karna’s spirit knew what I hadn’t ever been able to tell him.”
She sows vengence and reaps the bloody fruit of it. She loses her father, brother and her five sons in the war.
Sometimes we feel sorry for her, though married over five times, she doesnt find true love in her marriage. Bheem is the only one, who loves her, though her other husbands treat her with respect. She is passed like a drinking cup from one husband to another.
Panchalli choses her husband over her kids, when they leave for exile. Overcome with anger,lust and vengence to bring about the war, she goes along with them, so that they remain focussed and bring about the calamity.
All throughout their 12 years of exile, she remains with her matted hair, to constantly taunt her husbands of their failing to rescue her at the utmost time of her humilation.
Again after their exile and war, she longs to cherish and bond with her children, regretting their childhood that she had missed, so deeply. But fate plays a cruel hand here, Snatches them away from her forever...
All throughout her life she struggles for status, power and in the end, those were mere illusions. She dies alone and abandoned at the end.
This book leaves the reader contented, reading about a woman's initimate feelings, whom the world calls a Kritya. Read this book, you will change your view about Panchalli.

Hip Grandma said…
Are these fictional additions to the original character? I knew of Panchali's love for Karna but I......... well.I think i'll get hold of the book and read it for myself. seems a good choice for the contest.
October 21, 2010 at 7:28 AM

Gita Jaishankar said…
"Dark and attractive, fiery, wild tempered, haughty princess"...this kind of reminds me of the girl who wrote this post ;)...Nicely written da...very interesting facts about Panchali...Save that copy for me..I'll take it when I come there...All the best with the contest :)
October 21, 2010 at 7:32 AM

Devasena Hariharan said…
All along i have been acting, keeping that soft image of mine in this blogger world..now you come and tarnish this..

Well that book itself is a borrowed book from http://itchingtowriteblogs.blogspot.com/

Marie said…
Deva I totally agree with your sis....an apt description of your sweet nature:).....Very interesting review....You have definitely aroused my curiosity...Will read this book and comment on your review later....
October 21, 2010 at 8:14 PM

Devasena Hariharan said…
@Marie- thanx for the testimony darling. I owe u a lot..

Vikis Kitchen said…
Don't know these facts(!) about Panjali. I think I am not brave enough to receive this idea:) I too imagined her as very fragile lady. Those TV characters blindfolded us all:) Yes, women are wild and i am proud of it!...very well written dear. Your review tempts me to buy the book:)
October 29, 2010 at 8:28 AM

Viji said…
hey this is new to me... Paanchali loved Karnan?
first thing want to read this book.. woman! you are eloquent when it comes to writing... wonderful presentation.
October 30, 2010 at 5:54 AM

Devasena Hariharan said…
gee thanks darling.. Viji u are too sweet with me when it comes to comments..
November 1, 2010 at 8:04 AM

Ushnish Ghosh said…
Dear Devasena
I feel good that , you liked the Kerala posting.
How come I missed this one? Very nice indeed. Actually Mahabharata has so many versions ( not the basics) that it makes interesting reading. There are unwritten version of sub-stories, locally coined and passed down from generations. For example there are many sub stories in Orissa and not there in Bengal and Vise versa.
Actually Mahabharat is a book of ultimate wisdom, unsurpassed by any other book. In my management lectures, I used to quote extensively from Mahabharat characters. I love to read all interpretation of Mahabharat characters...it is amazing.
Now a quiz for you.
1. Where do you have Duryodhan temple in India?
2. Where was the palace made of Lakha (Jatu-gruha), where Kaurava tried to burn the pandavas?
I have visited both the places. You get 10% credit if you get it from the net..ha ha
have a nice week
December 6, 2010 at 7:23 PM

Uma Anandane said…
Nice Usha..its reminds me of Mahabharatham.You have written the story well.Dont know you are blogging still...and I 'm happy that you did :)
January 28, 2011 at 8:58 AM

Devasena Hariharan
Yes, I'm an ordinary Working Woman, a Wife, a Struggling Cook(burning stuff most often), miss my cab by 5 mins daily, heaps of laundry piled up, an unkempt house. Yet I strive to be 'THE PERFECT'. But I'm the world for my Taz(Tasmanian Devil-Loonely Tunes), who eagerly eats what I try out and hugs me to cheer me up.